Malcolm Gladwell’s book David and Goliath seeks to look with fresh eyes at how we consider advantages and disadvantages both for individuals and for groups. He considers everything from the battle between, well, David and Goliath, but also battles between Germans and Brits, Americans and Vietnamese, disabled people and their disabilities, children and the tragedies they need to overcome, and other such battles.

His conclusion is that we often look at these things through the wrong lens, seeing the weak as weaker than they are and the strong as stronger than they are, and that if we take the time to really consider a situation we will do better in analyzing the balance of power. He is especially compelling when he writes about the role of various disabilities in the lives of people and the role of disadvantages faced during childhood and the roles they can play.

To be sure Gladwell is on some level cherry picking his examples to give more power to his argument. Even so, it is a good read and can make one think again about the story we tell ourselves about where we are and how we have come to be here and what role or control we have in our fates.

I couldn’t help but think of the Presbyterian Church in Canada as I read the book. On some level we see ourselves as Goliath, the giant-well established-slow-to-move-behemoth amidst a swirling fast paced world of technology and evangelists. Maybe we feel we are on the ropes and there appears to be little anyone can do about it, like Goliath we will fall and some fast talking preacher with a smooth sounding band will take out place. We haven’t yet figured out how to readjust our perspectives, how to see the growing advantages at our doors. Maybe we haven’t even really identified them yet, let alone begun using them.

For example, today people who go to church have to really want to be there; there is no cultural, and little family obligation, to attend a worship service. In many cases the exact opposite is true, there is plenty of pressure to be other places Sunday morning. So one possible advantage to our current state is that we may have a higher percentage of people who are personally invested in church and in their lives of faith.

Another possible advantage is that as we get smaller we get leaner and that could be allowing us to change more rapidly than we have in the past. We missed the boat on many opportunities to spread the Gospel and many, many, groups stepped into the breach. Perhaps today we are better set to do so and we can bring our experiences of the past to bear helpfully on the future rather than choke it out.

Some people are concerned we have too many retired ministers and not enough good active ones, the latter may be true. Yet, the opportunity for mentorship, for dialogue, for mutual support, is increased when a plethora of men (and some women, though being on the whole newer to ministry there are fewer of them already retired) who have experiences from which to speak are available to talk. This could be a huge advantage for a young minister like me, there are more possible mentors right now than ever before, and fewer young ministers…which means I can get all the attention and help I need.

I think Gladwell’s book is, on some level, meant to inspire a people fed up with narrow politics, a bad economy with service jobs and little commitment by employees or employers, worries about pension plans and how this is all going to work out, a world starring down the barrel of another earthquake, tsunami, tornado, or drought. It is the perfect book for many Presbyterians in Canada. I suggest you pick it up, you might see us (and yourself) more as a David than as a Goliath when you are done. 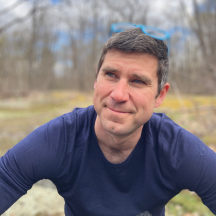 Previous
It's Simple Really
Next
Garmins and God
Jan 29 Jesus, The Anointed One…
Jan 22 Jesus, the Resurrection and…